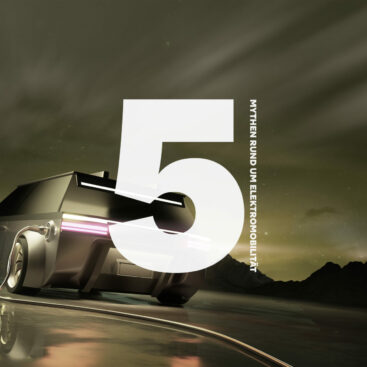 Myth #1:
There is too little electricity for electric cars in Austria

If one million passenger cars in Austria were to drive electrically, the annual electricity demand would increase by 2.6 terawatt hours - that is just 3.6 percent of the total consumption. According to a study by the Vienna University of Technology, covering one hundred percent of the domestic electricity demand with renewable energy is feasible by 2030 - this would make electric cars in Austria climate-neutral.

For orientation, here are also some values that were forecast for the year 2020: For example, the Energy Strategy assumes a total electricity demand of 61,938 gigawatt hours (GWh) for 2020. The electricity required for e-cars is estimated to be 429 GWh in 2020. This means that e-cars will be responsible for less than one percent of the total electricity demand at that time. According to the forecasts, this electricity demand could be covered by the expansion of renewable energy sources such as wind and photovoltaics. Source: Energie AG

Myth #2:
Charging is complicated and takes a long time

It is true that charging an electric car today still takes significantly longer than a quick stop at the petrol station with a combustion engine. However, there are already fast-charging stations that fully charge compatible vehicles with long ranges within just 20 minutes. 400 to 500 kilometres are then possible. That's pretty close to the standard petrol engine. Unlike with internal combustion engines, you don't have to stand next to your car while it's charging. You can use the time to go shopping or to work. If you charge your car at home, the charging time is irrelevant anyway.

Electricity in combination with water is considered dangerous. Some people tend to transfer this awareness of danger to e-cars as well.

- Charging in the rain
Putting a plug into the socket in the rain - isn't that dangerous? No, charging in rain and wet conditions is completely safe, as long as the batteries and charging station comply with the standard. Current only flows when the contact is fully established.

Statistically, e-cars burn far less frequently than petrol and diesel cars. With classic cars, 90 vehicle fires per billion kilometres driven are considered normal. According to a statistic from the American highway fire brigade, Tesla has only two fires per billion kilometres. Another study from 2018 does not put the burning EVs in relation to the kilometres driven, but to the number of cars overall. It counted a total of 21 burning electric cars; that was 20 times fewer fires than for petrol and diesel cars. The informative value of such statistics is not yet very good because of the small number of fires involving e-cars, but they do not seem to be any more dangerous than petrol cars, rather the opposite.

Myth #4:
The range of electric cars is too short

Smaller electric cars can now cover 200 to 300 kilometres on one charge. At 40 kilometres per day, the electric car must be charged once a week on average. Larger models, which are also suitable for longer distances, have a range of up to 550 kilometres. Even if you drive the 900 kilometres from Vienna to Dortmund, depending on the model, you can easily do it with one or two breaks of 30 minutes each at the charging station - which you should take anyway in the interest of road safety, even with a combustion engine.

However, consider this: according to a 2018 AK study, Austrian employees commute an average of 35 kilometres per day. A distance that pays off several times over with a full battery.

Myth #5:
The switch to electromobility harms the economy

The domestic economy also benefits from the international expansion of e-mobility. Numerous companies are already benefiting from the e-car trend, for example as battery developers or suppliers of high-tech cables and information technologies. According to an E-MAPP study on domestic production through e-mobility, a total of up to 33,900 jobs can be created by 2030 and 3.1 billion euros in value added can be generated in Austria. In addition, phasing out fossil-fuelled cars will bring billions in savings on energy imports. E-vehicles, which replace conventional vehicles with combustion engines, also contribute to the reduction of CO2 avoidance costs and, through reduced pollutants, to lower health costs.

Whether press releases, new products or extraordinary news - here you will find all news about our company.

Let us get in touch

This website uses cookies to improve your experience while you navigate through the website. Out of these, the cookies that are categorised as necessary are stored on your browser as they are essential for the working of basic functionalities of the website. We also use third-party cookies that help us analyze and understand how you use this website. These cookies will be stored in your browser only with your consent. You also have the option to opt-out of these cookies. But opting out of some of these cookies may affect your browsing experience.
Necessary Always Enabled
Necessary cookies are absolutely essential for the website to function properly. These cookies ensure basic functionalities and security features of the website, anonymously.
Functional
Functional cookies help to perform certain functionalities like sharing the content of the website on social media platforms, collect feedbacks, and other third-party features.
Performance
Performance cookies are used to understand and analyze the key performance indexes of the website which helps in delivering a better user experience for the visitors.
Analytics
Analytical cookies are used to understand how visitors interact with the website. These cookies help provide information on metrics the number of visitors, bounce rate, traffic source, etc..
Advertisement
Advertisement cookies are used to provide visitors with relevant ads and marketing campaigns. These cookies track visitors across websites and collect information to provide customized ads.
Others
Other uncategorised cookies are those that are being analysed and have not been classified into a category as yet.
SAVE & ACCEPT